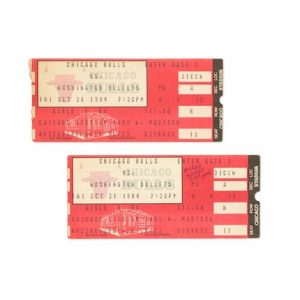 Michael Jordan made his debut against the Washington Bullets in October of 1984. The ticket for the game at the old Chicago Stadium has been kept in decent shape for years and will now hit the auction block.

TMZ states the ticket stub can sell for as high as six figures. The ticket will be sold at Bonhams and is believed to secure the owners between $200K and $300K.

The tickets have “Michael Jordan’s first game” on the front and back.

Earlier this summer, a game-worn Michael Jordan jersey from the 1998 NBA Finals was expected to sell for around $5 million. According to TMZ, the actual sale was for $10 million.

In the jersey, Jordan dropped 33 points on Karl Malone and the Utah Jazz. The Bulls lost the game but would win the series, getting the Bulls their sixth NBA championship.

“Red is really the color that people think about when they think about Michael Jordan, and this is the only red Finals jersey to ever appear at auction,” said Sotheby’s head of streetwear and modern collectibles Brahm Watcher to the New York Post.

The post SOURCE SPORTS: Ticket Stubs from Michael Jordan’s First Game Up for Auction, Believed to be Sold for $300K appeared first on The Source.