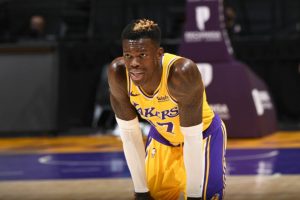 Fresh off an impressive run in the Eurobasket tournament, Dennis Schroder rejoined the Los Angeles Lakers on a one-year, $2.64 million contract. According to Schroder, the reunion was in discussion for three months and the final result came with a message from LeBron James.

“I’ve been talking to the Lakers for the last three months. I knew I was going back, but I wanted to take my time,” Schroder explained.

Upon returning, Schroder revealed he got a welcoming message from King James.

“LeBron said he was glad he got me back,” Schroder said. “It’s unfinished business. That year when I was there, there were no fans. There was COVID; everybody was hurt. This year hopefully, everything stays good, everybody stays healthy, and then we’ll try to go for something.”

Do you think the Lakers can turn around their poor play last year?

The post SOURCE SPORTS: Dennis Schroder Says LeBron James is ‘Glad’ He’s Back with the Lakers appeared first on The Source.