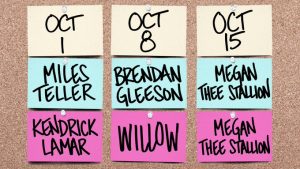 The Hot Girl, Mr. Morale, and Willow are headed to Saturday Night Live. On Tuesday, the NBC staple sketch comedy series announced Megan Thee Stallion, Willow Smith and Kendrick Lamar as performers for the forthcoming season. Thee Stallion will host the episodes that she will perform on. Willow will appear in the episode in between the two.

The performance will be the third on the show from Kendrick, it is the second appearance for Thee Stallion but her first time as host. Willow will be a first time performer and will be on the October 8 episode hosted by Brendan Gleeson.

You can see the full run of guests for the first three episodes and past performances from the stars below.