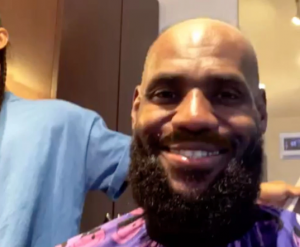 Earlier today, LeBron James shared a photo of his new haircut. The 37 year old basketball veteran seems to be taking inspiration from other basketball greats such as Michael Jordan and Kobe by going completely bald.

LeBron posted a picture of himself on his Instagram story, still in the barber chair with his cape on sporting the fully bald look. He added laughing emoji’s and the bald grandpa emoji.

LeBron’s hairline has a been a point of conversation on the internet for years. Every year, people would poke fun about how his hairline would recede and how he wore a headband to make his hair loss less obvious. The internet would even point out if LeBron seemed to get hair loss surgery if he came into a new season with a crisp hairline. Even some people on the internet thought that the GOAT was using a filter.

Shortly after the picture made its rounds on the internet, people seemed to congratulate LeBron for finally letting his hair go. “It’s about time my brother” one Twitter user wrote.

LeBron has not said anything about his recent transformation, but he surely will address it when a reporter asks him about it following the season opener.

You can check out some of the reactions below.

The post LeBron Channels His Inner MJ And Kobe By Going Bald, The Internet Reacts appeared first on The Source.