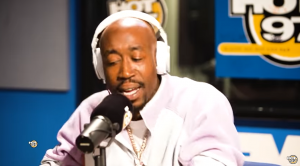 Freddie Gibbs is looking to take the rap game by storm with his highly anticipated SSS (Soul Sold Separately) album set to release on September 30. Last week, clips from his interview with Funk Flex started to emerge where he talked about possibly making amends with DJ Akademiks The full interview dropped today, and he had some scathing things to say about the podcaster and hip-hop journalist along with Benny the Butcher.

Freddie Gibb’s didn’t hold back on his diss towards Benny as he started his freestyle off with “Leg shot almost bled out your artery” referring to Benny’s near fatal shooting at a Walmart in Houston in 2020. Elsewhere IN the freestlye he called out R. Kelly and said that he’s the “new king of R&B.”

Towards the end of his freestlye, Gibb’s took aim at DJ Akademiks, rapping “Bout to squeeze Akademik’s titties I love a fat bitch/You a dick in the booty nigga go get the strap bitch.”

Gibbs got the stamp from Funk Flex following the freestyle. The two continued the interview afterwards, with Gibbs saying that he didn’t mean “Fuck R. Kelly” like that and said he was going to put something on his commissary. He also added that he feels like if he and DJ Akademiks sat down and talked they could actually be cool.

The post Freddie Gibbs Takes Aim At Benny The Butcher And DJ Akademiks In New Funk Flex Freestlye, Calls Himself The “King Of R&B” appeared first on The Source.