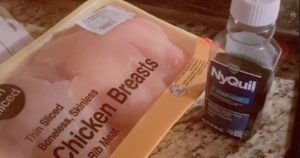 The FDA is warning TikTok users not to try a bizarre recipe that has gone viral. TikTok is known for trending challenges and pranks, however the latest recipe trend is seemingly absurd but not enough for the FDA to stay quiet. The feds say NyQuil-marinated chicken, or the ‘Sleepy Chicken Challenge’ as it’s called, is dangerous and potentially deadly.

The FDA says cooking the medicine makes it more powerful and can change its properties.  They add that inhaling the vapors during the cooking process can cause lung damage.

According to Yahoo Life, the trend is actually a joke but videos of the meal are circulating on social media, and people are concerned children will be vulnerable to influence.

In addition, the TikTok recipe calls for an amount of NyQuil that’s much larger than the recommended adult dose.

In 2021 the ‘Milk Crate Challenge’, where people used milk crates to stack in a pyramid and then attempt to climb up them like stairs went viral. Tik Tok banned the challenge after numerous participants were seen crashing down with injuries from their failed attempts.

Who thought that cooking chicken in NyQuil medicine was a good idea?