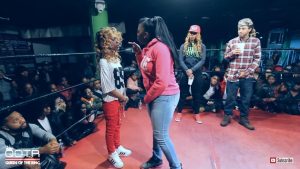 After dominating female battle rap for more than a decade, Queen Of The Ring is back breaking boundaries in hip hop. Set to change the face of battle rap once again, Queen Of The Ring presents their inaugural “Prom Night” event. The only formal affair of its kind, this event will celebrate the presence and progress of women in battle rap.

Always keeping an ear to the street, QOTR has cultivated the top MC’s circulating female battle events. “Prom Night” –  Queen of the Ring’s premiere and formal battle-rap event is comprised of exclusive “one rounder” 1-on-1 and 2-on-2 battles where, when appropriate, the two-person team is an actual couple. Everyone, including the battle-rappers, the judges, and the crowd will be required to dress in formal attire.
CLICK HERE for more information.

Check out the trailer below!

The post [WATCH] Queen Of The Ring Takes Battle Rap To New Level With ‘Prom Night’ Event appeared first on The Source.