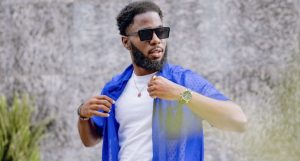 It is not everyday you wake up atop the Billboard Hot 100 charts for a collaborative song with Future, Drake & Tems. This is the reality Nigerian producer, Tejiri Akpoghene. Tejiri is the man behind the board of Tem’s “Higher,” which is sample for her collaboration with Future & Drake, “Wait For U.”

While Tejiri enjoys the fruits of his past labor, the road to a hit track to consistency and time. In addition to “Higher,” Tejiri produced “Looku Looku” and “Vibe Out.”

He details working with Tems in 2018 after the two met on Instagram. Tejiri says their creative chemistry was “an instant connection.”

“When I first met Tems, she was still trying to find her sound,” said the Naija producer. “She was experimenting with auto-tune at the time and had done a lot of songs using auto-tune. As you know, Tem’s voice is so unique. It’s one of a kind, so there is no exact auto-tune note for her.”

Tejiri expressed the fact that Nigerian artists often find it difficult to collaborate with producers that understand their unique sound. The mainstream growth that Nigerian artists have seen over the past 6 years is quite rapid. The sound has been prevalent for more than a decade, but its popularity has seen exponential growth in the past 6 years.

Tejiri was heavily influenced by Timbaland and Dr. Dre, but cites Timbaland as his biggest influences. With the help of his brother, Frederick Akpoghene, he began producing beats at 14. Now the two plan to replicate the

“The partnership helps to amplify Tejiri’s artistry,” says Fred. “Whether it’s production or his own music, that is goal and intention. They believe in the Tejiri brand.

The post ‘Wait For U’ Producer Tejiri Akpoghene Signs To Ultra and The Revels Group’s Coup D’Etat Music Publishing appeared first on The Source.