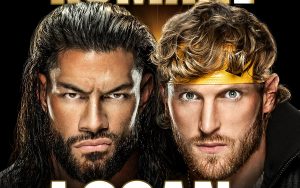 Logan Paul is getting ready to battle with The Tribal Chief. WWE will head to Saudi Arabia next month, and the headlining match will be Undisputed WWE Universal Champion Roman Reigns taking on the rising wrestler and YouTube star.

“It will be a match like no other. It will be a spectacle like no other,” WWE COO Triple H said of the upcoming match. “Logan Paul is a cultural phenomenon. He has more than 100 million social media followers. According to him and his crew, he has the biggest podcast in the world. When it comes to the WWE, his dedication, his passion for this, I can tell you this. Everything that he has done in the small time with us, he has my respect, and I don’t give that easily.”

While the Las Vegas press conference remained mostly peaceful, Paul was on the receiving end of a push by Reigns after he verbally sparred with the champ’s advocate Paul Heyman.

Reigns travels with the Bloodline, a collective of family members and faction court jester Sami Zayn, which would leave Paul vastly outnumbered. Unless somebody else decides to join the party.