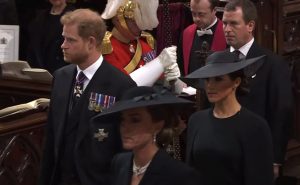 Prince Harry and Meghan Markle were reportedly “uninvited” to a state reception hosted by King Charles on Sunday.  The Duke and Duchess received an invitation to the event earlier this week, but palace officials say the reception is for working royals only.

The confusion over whether Harry and Meghan will attend the receptions follows mixed messaging over the Prince’s right to wear a military uniform during funeral events.

Meanwhile, crowds of mourners continued to line up to view her coffin in Westminster Abbey, some waiting up to 14 hours to pay their respects.

Great Britain also observed a national minute of silence for The Queen.  A muted Big Ben rang its bells at 8 p.m. to mark the start of a national moment of reflection.