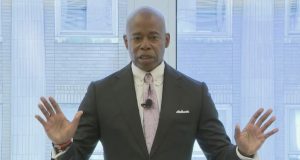 Mayor Eric Adams says New York City may take legal action against Texas over the busloads of illegal immigrants being sent to the city.

Mayor Adams says with no advance notice and no permission, Texas has bused at least 2500 illegal immigrants to the Big Apple, a sanctuary city, since May.  He told CNN’s “State of the Union” it’s creating a humanitarian crisis in the city and is no way to treat other municipalities. Adams called the “humanitarian crisis” a situation that requires coordination on the federal, state, and local level.

Mayor Eric Adams went on to say  the busing of migrants from Texas to sanctuary cities like New York City is just a cover-up for human rights offenses. Civil rights attorneys are calling for state and federal investigations after dozens of migrants were sent to the home of VP Harris in Martha’s Vineyard last week.

The Mayor says New York has opened 23 emergency homeless shelters since May and plans to open 38 more, but that still won’t be enough.