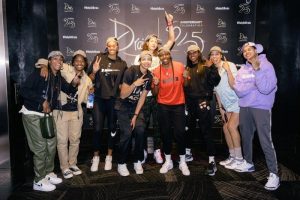 The Las Vegas Aces, the new WNBA Champions, were welcomed home from Connecticut with a celebration fit for champions at Drai’s Nightclub at The Cromwell early this morning. Most of the squad, including WNBA Finals MVP Chelsea Gray and teammates Kierstan Bell, Aisha Sheppard, and Theresa Plaisance, participated in the fun after flying back from Connecticut at 2:30 a.m. The squad partied and danced from the stage for most of what was a once-in-a-lifetime performance after being invited on stage by Drai’s LIVE artist, E-40.

A magnum of Ace of Spades, 12 bottles of Mot & Chandon Champagne Rosé Impérial, four bottles of Volcán X.A. tequila, and Belvedere Vodka were presented to the crew as welcome gifts. Throughout the evening, Drai’s Dolls carried sparklers. They displayed huge images of the players and the Las Vegas Aces emblem and a message stating, “Congrats Las Vegas Aces 2022 WNBA Champions.”

You can see images from the celebration below.

The post Las Vegas Aces Party with E-40 at Drai’s Nightclub to Celebrate WNBA Championship appeared first on The Source.