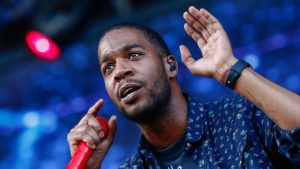 Kid Cudi definitely hasn’t been feeling the love this year. The man on the moon recently tweeted that he thinks he’s currently the most hated man in hip hop.

“I am the most hated man in hip hop right now it seems but im really one of the most blessed,” he tweeted.

Cudi’s tweet came shortly after he noticed that songs from his upcoming Entergalactic album started to appear on the internet. However, whoever leaked the project put fart sounds over the songs. Fans quickly speculated that it was Mike Dean who leaked the album and laced the songs with flatulent sounds.

Cudi’s upcoming project is slated to release on September 30 along with his Netflix series of the same name.

Hopefully, things get better for Cudi and he doesn’t feel like he’s the most hated man in hip hop. Cudi began the year with Kanye tarnishing their friendship over Pete Davidson, and has been the butt of many of Kanye’s jokes ever since.

Cudi was announced as Ye’s replacement for Rolling Loud Miami and was met with bottle throwers while he was on stage, and now there seems to be beef between him and Mike Dean after the producer/engineer was dropped from Kid Cudi’s festival lineup.

After he was dropped, Mike Dean tweeted about Cudi, calling him “Mid” Cudi. “Dickhead canceled me just from jealousy. Just because I was on tour with The Weeknd,” he tweeted. “Also there’s more people in a half full stadium when I play than when Mid plays the small arenas.”

The post Kid Cudi Calls Himself “The Most Hated Man In Hip-Hop Right Now” appeared first on The Source.