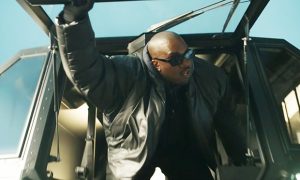 Whenever Kanye West is actively using social media, it is recommended that followers are tapped in. Over the last month, the billionaire music and fashion mogul has used his Instagram to bring awareness and express his grievances regarding his partnerships with both Adidas and Gap.

Last week he took another step in ending the relationship with Gap after sending a termination letter to the company.

On Sunday he took to his Instagram to post a summary of restrictions draft that was sent to him in response to his termination letter.The restrictions read:

“Neither Yeezy nor Ye may use, wear, sponsor, promote market, advertise, encore, design, manufacture, license sell, or provide consulting services with respect to any of the following products under the Yeezy Trademarks or Ye’s likeness or any other identifiable attribute, feature or indica of Ye.”

“Welp I guess the war’s not over,” said Ye under the post.

He later posted Gap’s list of Board of Directors twice. In the first post, he made followers aware of the lack of support he has gotten for his upcoming fashion show.

“Magically No production companies have been willing to produce my YZYSZN9 fashion show in Paris on October 3rd,” said Ye.

In the second post, he criticized Gap’s Chairman of the Board and Interim CEO, Bobby Martin, for what Ye insinuated hypocrisy.

“Funny that Bob Martin called me and said we are amicably ending our deal But I can’t do a fashion show but they can keep selling my product hmmmmm,” said Ye.

A number of reasons led to the termination of the Yeezy Gap partnership including not opening retail stores. The company was required to open five stores by July 2023.

We’ll continue to monitor Ye’s relationship with both Gap and Adidas.

Ye also recently joined TikTok as well. In his debut to the popular platform, he posted a video listening to his Grammy Award winning Jesus Is King album.