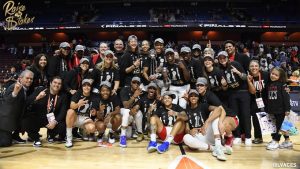 The WNBA season is officially over, and the Las Vegas Aces are your new champions. On Sunday, A’Ja Wilson, Chelsea Gray, and the Aces finished off the Connecticut Sun 3-1 to become the new top team in the league. This is the first championship for the Aces franchise.

Gray was named Finals MVP after her stellar clutch efforts throughout the season.

Aces head coach Becky Hammon became the first person in league history to win the championship in the first season as coach. She also won the Coach of the Year award and led the Aces to the No. 1 overall seed and the Commissioners Cup championship.

Wilson, League MVP and Defensive Player of the year, would add another double-double to her Finals run, finishing Game 4 with 11 points and 14 rebounds. Gray had 20 and six assists.

“she’s just now entering her prime years,” Hammon said of Wilson. “Think about the learning curve, even just this year. She learned some things entirely new, defensively and offensively. For her to excel like this, I’m excited about the upcoming years because of the foundation she’s put in. Her game is going to continue to expand. I really don’t know how good she can be, but she’s already here … I wouldn’t put a cap on her.”

On the losing end, the Finals was the fourth trip for the Sun. They have lost every visit. In the closing game, Alyssa Thomas had the second triple-double in WNBA Finals history, posting 11 points, 11 assists, and 10 rebounds. She delivered the first triple-double in history during game 3.