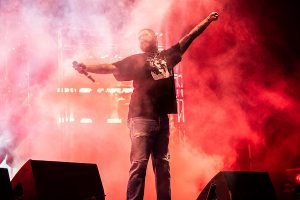 According to HipHopDX, while walking on a ramp, Malone stepped into a hole in the floor that is used to lower his guitar. The hole was not properly covered, leading to his fall.

In a video shared online, Malone was unable to brace for his fall and remained on the floor for minutes until he was assisted by staff. Post Malone would return to the stage after 15 minutes but had an abbreviated set.

“Thank you for the patience,” Post Malone said online. “Thank you for putting up with my dumb ass. Whenever we do the acoustic part of the show, the guitar is on a guitar stand, and it goes down, and it’s this big ass hole. I go around, step through there, and I bust my ass.”

You can see the moment below.