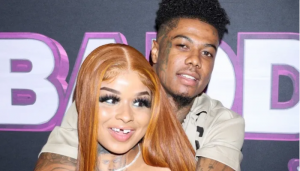 Earlier this week, footage appeared to show the aftermath of Blueface punching Chrisean Rock’s dad. While this appeared to cast the “Thotiana” rapper in a negative light, newly released surveillance footage shows that Blueface did not throw the first punch, as had been earlier speculated.

The altercation took place outside of the Four Seasons in Baltimore on Friday evening. It appeared that a large number of Blueface and Rock’s families and entourages were meeting in front of a video crew.

Newly released video footage from a nearby surveillance camera shows a male (reportedly Rock’s father, whose name is unclear) in a tense conversation with Blueface. The man then sucker punches Blueface, who then stumbles backwards. The video shows Blueface swinging and missing at first, but then punching the man, knocking him down.

Rock has cast her father in a negative light on social media in the past, calling him “absent” and “abusive” in now-deleted tweets.

By the time the police arrived, the situation appears to have de-escalated with Baltimore PD stating that they responded to a disturbance call, but no official report was filed.

The event comes just days after Blueface and Rock appeared together walking the runway at NYFW. However, the couple has a long and public history of fighting.