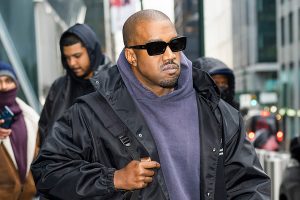 Earlier this week, in an interview with Bloomberg, Kanye shared plans of ending his partnerships with Adidas and Gap when the contracts expired in 2026 and 2030, respectively. In his interview he noted that there would be “No more companies standing in between me and the audience.”

Well, it seems as if Kanye is taking the initiative and not waiting for his contracts to expire. One of West’s attorneys told the Associated Press earlier this morning that a notice of termination was sent to GAP executives, effectively ending the Yeezy x GAP partnership after only two years.

The termination letter stated that GAP had failed to uphold their end of the agreement, which included launching Yeezy GAP merchandise in retail stores and eventually opening up Yeezy GAP retail stores by next year. “Gap left Ye no choice but to terminate their collaboration agreement because of Gap’s substantial noncompliance,” one of Ye’s lawyers, Nicholas Gravante Jr, said in an email to the AP.

While the Yeezy GAP Engineeered By Balenciaga collection was made available in stores, the notice of termination letter says that the collection was a part of a separate agreement and does not fulfill GAP’s contractual obligations.

When the partnership between Ye and the clothing giant was announced 2 years ago, many were excited that Yeezy apparel would finally be available to the masses. It was a full circle event for Kanye who used to work at the GAP and famously rapped about his experience on The College Dropout. His partnership also would help him fulfill his vision of creating egalitarian clothing for the masses.

However, since the partnership was announced 2 years ago, it has been marred by inconsistency. Pre orders for the Yeezy “round jacket” first dropped after the first of three DONDA listening parties and in September of last year, the “perfect hoodies” were made available online. However, none of these drops were put in retail stores.

Now, Ye is destined to move on from relying on corporate partnerships and will take matters into his own hands.

The post Yeezy GAP Partnership Is Over! Kanye Sends Notice Of Termination Letter To GAP Executives appeared first on The Source.