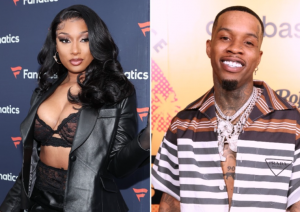 According to a report from TMZ, Tory Lanez can breathe easy for a couple of months as his trial in the Megan Thee Stallion shooting has been postponed because of his lawyer’s schedule.

The report says that the new trial date will be between November 28 and December 8, with Megan’s former best friend, Kelsey Harris, who was in the SUV with Megan and Tory on the night of the shooting, is set to testify for the prosecution.

In December 2021, a LAPD officer testified that Megan initially reported that she cut her foot on glass before she reported that the injury was caused by Lanez shooting her while yelling, “Dance, bitch! Dance!! She claimed that she was trying to protect Lanez in the apex of the George Floyd murder and riots, fearing what would happen if she told police that he had a gun.

Tory’s facing one count of assault with a semiautomatic firearm and one count of carrying a concealed, unregistered weapon.

He’s plead not guilty, but if convicted, he could face up to 22 years in prison.