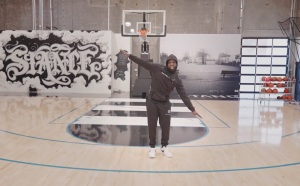 NBA trainer, influencer, and hip-hop artist Dribble2Much announced the release of his new song “Coach Rappin’.” The release is a tandem effort of Kayenne Group and Empire.

Elite NBA players, including Kevin Durant, Chris Paul, Anthony Davis, DeMar DeRozan, Paul George, Jamal Crawford, and others, have received training from the renowned basketball personality. In order to help Drake and 2Chainz improve their basketball talents, Dribble2Much has also worked with them.

Now that he has a new track and music video that showcases his transformation from NBA trainer to rapper, Dribble2Much is rediscovering his love for hip-hop. Travis Scott, Trippie Redd, OT Genasis, NBA star Damian Lillard, and NFL athlete Le’Veon Bell are just a few of the famous musicians with whom he has recorded music.

You can hear the new release below.

The post NBA Trainer Dribble2Much Doubles as a Rapper in New Single ‘Coach Rappin’ appeared first on The Source.