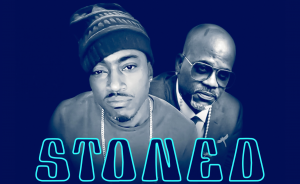 When you think of great weed flicks, you think of Cheech and Chong, Half Baked, Pineapple Express, and one could even argue Friday should be on that list. Now it seems as if another film, Stoned, is trying to make its way to that list, and it’s made by no other than Dame Dash.

Stoned stars Lucien Watson, a former member of “State Of Mind”, the first group that Kanye West was a part of in the 90’s. The film tells the story of two friends from different worlds, Joel and Marquis, who met up at a summer camp as kids and decide to meet up in Wyoming at Marquis’ uncle’s ranch. However, things go awry after Marquis loses his luggage with his weed in it and the two go on a journey to find weed.

The movie was filmed in 8 days in 2020 on Kanye’s ranch in Wyoming. Lucien got the role as he was entertaining Kanye, Dame, and the others on the ranch. In a statement from Lucien, he explained Dame Dash’s involvement in the film and how he got the part.

“Dame Dash was the foundation of the project in terms of acting, producing, writing as well as bringing the vibe for the film,” Lucien said. He added that he got the role while he, Kanye, Dame, and other celebrities were at dinner, “in true Lucien fashion [he] had everybody laughing.” How I even got the role was because one night at Kanye’s ranch in Wyoming, Dame, Kanye, myself, and other celebs were at dinner and in true “Lucien fashion I had everyone laughing. Dame looked at Kanye and said, “I’m putting him in a movie tomorrow” and the rest was history.”

In the same statement, Lucien said that Stoned is inspired by other great weed flicks including How High, Half Baked, and Cheech and Chong, but is made for today’s audience, given that in 2022, weed is legal for recreational use in many states and the stigma of it has changed since those movies were made almost two decades ago.

“Within the Hip Hop community and my circle of friends, weed has always had a positive perception so it has never changed for me,” Lucien said. “It’s cool that the world sees all the positive effects that weed has in people’s lives from the health benefits to the financial aspect of it. The connection between this film and myself is that I come from the legacy market within the cannabis industry where the oppressed have been jailed for doing what companies are getting millions for today. In my younger days, I made money in the streets because of weed just like so many others within this culture. This film is a comedy, but it really gives great insight to cannabis culture and where we are today in terms of the perception of it.”

You can check out Stoned when it premieres next month on Tubi, Peacock, and the Dame Dash Network.

Find out more about Stoned here and check out the trailer below.

The post Dame Dash and Lucien Watson Team Up For Upcoming Weed Flick, ‘Stoned’ appeared first on The Source.