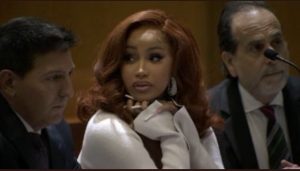 Cardi B sidestepped trial and jail time after she accepted a plea deal in her strip club assault case.

Cardi B agreed to plead guilty to 3rd-degree assault and reckless endangerment. Both crimes are a misdemeanor, and she will receive a punishment of 15 days of community service.

According to TMZ, Cardi was accused of paying $5,000 for the ordered attack of two strip club bartenders who allegedly had a relationship with Offset.

In addition to the plea deal, Cardi must stay away from both women for three years.

“Part of growing up and maturing is being accountable for your actions,” Cardi said to TMZ “As a mother, it’s a practice that I am trying to instill in my children, but the example starts with me. I’ve made some bad decisions in my past that I am not afraid to face and own up to.

“These moments don’t define me and they are not reflective of who I am now. I’m looking forward to moving past this situation with my family and friends and getting back to the things I love the most — music and my fans.”