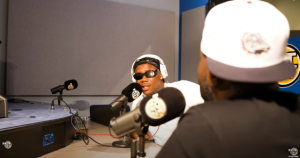 Funk Flex is well known for his very passionate takes on hip hop. One of his more famous, and controversial, takes happened when he was talking about how if 2Pac hadn’t of lied, then Biggie Small’s wouldn’t have gotten killed. “He lied!” Funk said about 2Pac.

Bay Area rapper, Symba, who has gotten cosigns from Dr. Dre, Lil Wayne, and others, headed up to Hot 97 where he had an interview with Funk Flex, and ended things off with a freestyle where he called out the legendary radio DJ for his comments about 2Pac.

“Flex, it’s an honor to meet you, but let’s be clear / I’ve done had a bone to pick with yo ass for four years / You’ve been a big part of this culture my whole life / So what I’m ’bout to say almost don’t feel right / You say some wild shit, most times you actually right / But all that disrespecting 2Pac shit stops tonight,” Symba rapped.

It seems as if his bars got Flex to fold as he interjected saying “Alright! Alright! I’ma stop! I won’t say nothing about him no more. They love him in The Bay! He stopped me today. Never more.” Flex then added “Rest in peace, 2Pac.”

However, Symba continued where he left off, rapping:

“As a West Coast nigga, ‘Pac gave all of us pride / That’s why when you said what you said we was surprised / How you wait 20-something years he died / To come on this muthafucka and keep screaming, ‘He lied!’”

“And he ain’t alive to tell his side / But I ain’t mad at you ’cause you was speaking your mind / To keep it real, you said what’s on half of these niggas’ minds / Just the next time you say it don’t sound like you ’bout to cry.”

You can watch the clip below