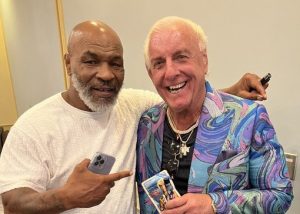 Would you want to get high with Ric Flair and Mike Tyson? The two combat sports legends were at a cannabis conference in Chicago, and TMZ caught the two sparking a couple of blunts to celebrate the occasion.

The two are partners in the Tyson 2.0 company, a cannabis company that produces various products. In the product line is the “Ric Flair Drip” products.

While on stage at the conference, the duo engaged in smoking, and Flair revealed marijuana assisted in handling pain from his wrestling days.

You can see the two below.