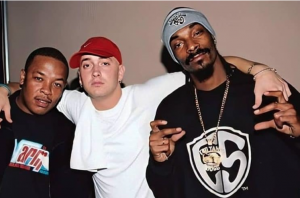 In the most recent episode of Paul Pod on Sirius XM, Eminem joined his longtime manager, Paul Rosenberg, during a special edition of Rosenberg’s original podcast series focused on Em’s Curtain Call 2 LP.

During Part 2 of their two-episode sit-down, Eminem and Paul clear the air over his feud with Snoop Dogg and discuss how Dr. Dre’s brain aneurysm played a role in reconciliation. Eminem also talking about how he was blown away listening to Juice WRLD rap to his instrumentals and from another experience working together. Additionally, Eminem claps back at those who slam his music and how he raps.

Paul Pod: Curtain Call 2 features Paul Rosenberg looking back and sitting down with special guests that have helped, guided and inspired Eminem throughout his career. The special takes an in depth look at the hits, art, videos, and albums that make up the legendary musical library of Eminem as told through first-hand experiences by the participants and collaborators on these celebrated projects.