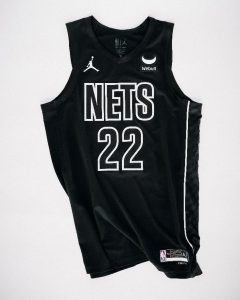 The Brooklyn Nets’ 2022–23 NBA Statement Edition uniform has been released. The striking black-on-black design, which is a modern twist on the team’s traditional Icon uniform that was initially introduced ten years ago when the Nets moved to Brooklyn, was motivated by the traditional outfit worn by New Yorkers. The team’s distinctive herringbone pattern can be seen flowing down the side of the jersey and shorts, and the uniform bears the NETS wordmark over the chest that is accented in platinum.

“Ten years ago, the Brooklyn Nets made history as the first NBA team to wear black and white as its primary colors,” said Andrew Karson, Senior Vice President of Brand Marketing, Strategy and Solutions at BSE Global, parent company of the Brooklyn Nets and Barclays Center. “For New Yorkers, black has been the uniform for decades – it’s chic, and for many represents edginess, sophistication and elegance. We’re proud to continue that tradition as we enter the Nets’ second decade in Brooklyn with a new twist on the classic Icon uniform.”

As part of this season’s Friday Night Live activities, the Nets will wear the Statement Edition uniforms on the court at Barclays Center on October 21 against the Toronto Raptors and at each of the team’s Friday night home games. This year’s Friday Night Live games at Barclays Center will include improved in-game programming and unique fan giveaways that will strengthen the bond between supporters and the team while showcasing the best of Brooklyn culture in terms of music, fashion, art, and lifestyle. This season, the Nets will don the Statement Edition outfit seven times in their home arena.

The Nets’ 2022-23 NBA Statement Edition uniforms will be available for purchase online at netsstore.com and in person at the Nets’ team store at Barclays Center, Brooklyn Fanatics, beginning this fall.