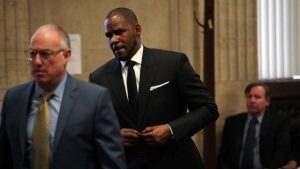 R. Kelly was found guilty by a federal grand jury earlier today, Sept 14, on child pornography charges for videotaping himself having sex with his 14 year old goddaughter over 2 decades ago. However, he was not found guilty for charges of conspiring to obstruct justice in his 2002 criminal case.

According to the Chicago Tribune, after only 11 hours of deliberation, the jury found Kelly guilty of three counts of child pornography and child enticement. However, Kelly was acquitted of 6 counts of obstruction of justice, and one count of conspiracy to receive child pornography.

Kelly had been indicted in 2019 on charges relating to producing and receiving child pornography, enticing minors for sex, and obstruction of justice. His two co-defendants, Brown and McDavid, were charged with helping Kelly cover up his crimes.

Kelly’s convictions come just a few months after received a 30 year prison sentence after being found guilty by a New York jury for sex trafficking and racketeering.