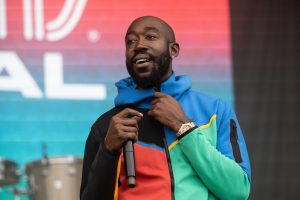 While he prepares for the release of his highly anticipated follow up to 2020’s critically acclaimed Alfredo, Freddie Gibbs has been dealing with beefs with Benny The Butcher and DJ Akademiks. He was even attacked and beaten up by Benny and his entourage at a barbeque restaurant.

In a clip for a new interview with Funkmaster Flex, the topic of DJ Akademiks comes up, and contrary to popular belief, Gibbs said that he thinks that if he and Ak sat down and had a conversation, then they would be cool with each other.

Flex added that he admires Ak for speaking his mind, to which Gibbs agreed and said that he could see himself actually being friends with Ak. “I think if we were to have a conversation, we’d probably be cool, I take it too,” Gibbs said. “I’ll take everything he say, and I love it. But you gotta take it when I give back.”

Freddie’s beef with Ak started in 2020 after Ak responded to Gibbs calling his former label boss, Jeezy “irrelevant.” Ak commented “If Jeezy is irrelevant, Freddie Gibbs, you are absolutely irrelevant as well.”

Since then there has been an on and off beef between the two. While the beef has not been violent, it sure has been hilarious, with Gibbs making a humorous freestlye about Ak, saying that he was going to “squeeze [DJ Akademik’s] tittes,” and making “Fuck Akademiks” a popular phrase on social media.

You can watch the clip here

The post Freddie Gibbs Thinks He And DJ Akademiks Can Make Amends, “We’d Probably Be Cool…” appeared first on The Source.