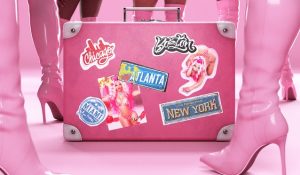 Nicki Minaj surprised fans with a remix to her Hot 100 chart topping singe, “Super Freaky Girl,” on Friday. The Young Money Queen teased the track on Thursday, before its official release, but there was no preview of what was to come from the collaborators. Let’s just say they did not disappoint.

Following Nicki’s original verse, JT set the tone from start to finish with notable bars such as:

Following JT verse, Bia a.k.a Barbia spits her bars with notable lines such as:

Katie Got Bandz represents New York with a hard-hitting verse and notable bars:

Akbar V is fourth to take the mic with a number of quotable. She even gets repetition from Nicki herself when she says: “No gag reflex, I ain’t never gonna choke.”

From “I’m cool J take a LL” to “Can’t mention the freak without AK,” Akbar V shows she can captivate listeners with a quick 16.

Malibu Mitch tees up the pitch before Nicki’s verse saying lines such as:

While each femcee is impressive with their bars, fans took to Twitter to deem Akbar V and JT’s verses as the top tier amongst the featured guest.

It is Nicki Minaj’s first collaboration with Akbar V, JT, Malibu Mitch and and Katie got Bandsz. It is Bia’s second collaboration in the past year with The Queen after they teamed up for the “Whole Lotta Money” (Remix) back in 2021.

Let us know in the comments if you agree with Twitter’s take on the ranking of the Queen Mix verses.