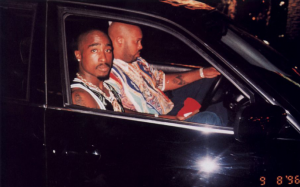 Cultural icon Tupac Shakur was then taken to the University Medical Center of Southern Nevada hospital after being shot several times in a drive-by on a Las Vegas strip on September 7, 1996, and was under a medically induced coma for six days before dying from internal bleeding on September 13, 1996.

After several failed attempts by doctors to revive 2Pac, his mother Afeni Shakur requested for his life support machine to be turned off. What were the events that transpired the days before the September 7th shooting that caused his early demise and why has the mystery of his death never been solved? These are the questions that remain 19 years later. Chris Carroll, a retired Las Vegas Metropolitan Police Department sergeant, told Vegas Seven Magazine in an interview last year that we may never know;

After all the documentaries that have been put out pertaining to Pac’s death, most fans attempt to put the clues together and create their own hypothesis yet without hard evidence it’s still just an educated guess as to what really happened the night of September 7, 1996.

The only real evidence police have are the witness accounts from Outlaw member E.D.I Mean, who claimed to have seen all four men in the vehicle and Yaki Kadafi, who was involved in a scuffle with officers two days following the shooting after they pulled over a driver he was with and he protested. Officers did not try to locate Kadafi, who was later gunned down in Irving, NJ two months after the shooting.

Compton investigators assembled mug shots of several gang members, which included Orlando Anderson, the Crip that Tupac attacked in the MGM Grand lobby hours before the shooting. Anderson is the suspect said to have fired the fatal shots that killed Pac. Las Vegas police later discounted Anderson as a suspect and interviewed him only once. He was later killed in an unrelated gang shooting.

‘Pac’s killer has yet to be found or even suspected, but the fight to bring his killer(s) to justice is continual and highly publicized, which will hopefully bring the truth about his untimely death to light.

The post Today In Hip Hop History: Tupac Shakur Died After Being Gunned Down On Las Vegas Strip 26 Years Ago appeared first on The Source.