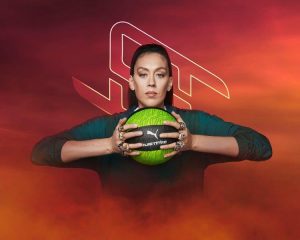 The Stewie 1 Quiet Fire, the first women’s signature basketball shoe in more than ten years, will be unveiled on Friday, September 16, by PUMA Hoops in partnership with WNBA MVP and Olympic gold medalist Breanna Stewart. The performance-driven shoe’s Quiet Fire colorway, a dramatic juxtaposition of neon yellow and contrasting black, captures Stewart’s fierce-yet-humble attitude on and off the court. Unparalleled style is ensured by matching clothing that incorporates retro influences and contemporary interpretations on traditional b-ball cuts.

Stewie 1 ends the industry’s lengthy drought of more than ten years and emphasizes the point of our long-overdue collaboration. The performance-driven shoe’s Quiet Fire colorway, a dramatic juxtaposition of neon yellow and contrasting black, captures Stewart’s fierce-yet-humble attitude on and off the court. The upper, which takes inspiration from the North Star, depicts the forward’s tremendous talent and pays homage to her high school team, while a subtle tonal flame design symbolizes this duality. The Stewie 1 is unequaled on all counts thanks to its revolutionary technology, which includes NITRO foam.

On September 16, the Stewie 1 Quiet Fire will be offered at DICK’S Sporting Goods, PUMA.com, the PUMA NYC Flagship Store, and a few other select stores across the world. In October, coordinating clothing items will become available. Retail prices for the Stewie 1 range from $35 to $140.