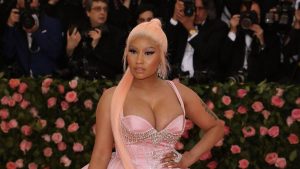 Akbar V is grabbing the ears, eyes and attention spans of rap fans since the release of the “Super Freaky Girl” (Queen Mix) on Friday. She certainly has an avid supporter in the Queen, Nicki Minaj, and the feeling is mutual.

The Love & Hip-Hop ATL reality star took to Twitter over the weekend to join #NickisTeaParty and fired off a couple of public service announcements.

“Just so we clear if u a opp of @NICKIMINAJ or foxy brown then u are a opp of mine I’m done being cordial,” she started, follow by multiple exclamation marks for emphasis. “don’t care too much bout any of y’all anyway … i know y’all don’t really like me …. And I’m ok with that just please stop pretending.”

Akbar V posted a 26-second snippet of a potential “SFG” follow-up. On the snippet, she raps:

The bar certainly caught Nicki’s attention as she complemented the song. Then followed up shortly after with a quoted retweet of the aforementioned lyrics.

Akbar V expressed her gratitude after her “idol” admired the track by quoting her lyrics.

Fans filled up her mentions asking Akbar V to drop the track. Now it is only a matter of time before its official release.

Was Nicki’s approval a potential sign for another collaboration? With the underlying mutual support between the two over the weekend, the possibilities are endless.

Minaj also teased her new track with Bleu entitled, “Love In The Way,” which is set to release this upcoming Friday. Nicki hinted at the track last month with an IG story post as well.