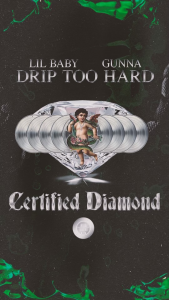 Lil Baby has snagged the rare RIAA Diamond certification for the 2018 hit song “Drip Too Hard,” created alongside Gunna. With only 85 other songs in history having gained the prestigious accreditation, Lil Baby’s placement among the elite of music is solidified by this distinction. This is the most recent in a string of extraordinary achievements for Lil Baby, and it occurs before the release of his recently announced and eagerly awaited album It’s Only Me.

“Drip Too Hard” was a key sign of Lil Baby’s star power. The song has accumulated a long list of achievements, including a Grammy nomination for Best Rap Song/Sung Performance, a peak position of #4 on the Billboard Hot 100, the first number-one song on Urban Radio in 2019, and the most played song in the format that year, a US radio audience of over 1 billion listeners, 345 million views of the music video, and over 4 billion streams globally to date.

The announcement comes immediately after the last performance of Lil Baby and Chris Brown’s North American One Of Them Ones tour and “Do We Have A Problem” with Nicki Minaj winning the MTV VMA for Best Hip Hop. Baby just celebrated the debut of his new documentary, Untrapped: The Story of Lil Baby, which was another significant accomplishment. The documentary, which debuted on Amazon Prime Video on August 26th, offers a close-up look at his early years before his sudden metamorphosis into one of hip-most hop’s elite.

The post Lil Baby and Gunna’s ‘Drip Too Hard’ is Officially Certified Diamond appeared first on The Source.