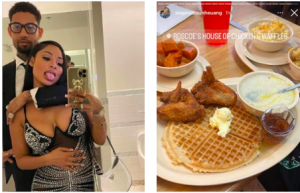 Last night, rapper Kodak Black took to his Instagram stories to react to PNB Rock’s passing. The Philadelphia rapper passed after being shot in Los Angeles during a robbery. Many have added that he was murdered after his girlfriend posted their location on Instagram.

Kodak posted a photo of his view from a plane and wrote over it, saying, “Big jets. Only jets anyways. Mannn I been low all day due to a headache I had earlier so I’m just getting to the news RF.”

He continued, “Ion usually speak on deaths! Go to funerals or nun kuz life goes on, but, SMH. PnB was my boy, I was jus OTP wit em last night! We be talkin bout him comin back out & poppin his shit again in this rap shit.”

“That hoe might as well kill herself,” he concluded.

Black added mentioning the photo has been circulating on social media, which Rock’s girlfriend posted on her personal Instagram account showing her food and the location of where they were.

The Los Angeles Times has reported that Rock was targeted for his jewelry.

Nicki Minaj and Cardi B. Each have also offered their outtakes on Rock’s passing.

“After Pop Smoke there’s no way we as rappers or our loved ones are still posting locations to our whereabouts,” Minaj began in a Tweet, referencing how Pop’s address had been posted on social media before his death. “To show waffles & some fried chicken????! He was such a pleasure to work with. Condolences to his mom & family. This makes me feel so sick. Jesus.”

After receiving backlash for her take, Minaj tweeted “The ppl around these rappers gain so much. It’s time to start really reminding them over & over!!! At least TRY to put your foot down if you CARE! Tell them!!! You’re not loved like you think you are!!! You’re prey!!!! In a world full of predators!!!! What’s not clicking???!!!”

In another tweet, she highlighted how being a mother influenced her decision to speak out on the situation. “Ima say what I want. As a RAPPER & as a MOTHER. I know 1st hand how these guys feel coming from the streets then being able to provide for their moms. My heart is hurting for the MOTHERS OF THESE KIDS that tried to make something better of their lives!!! LETS EDUCATE ASAP!!!

Cardi B had a different response to the details around Rock’s situation, discouraging people to place any blame for his death on his girlfriend. “I highly doubt n****s was looking at PMB’s babymom IG. He was in a bad location and people stay outside plotting. It’s very irresponsible and inconsiderate to blame her for something so tragic. We should be sending nothing but love to her and his family at this time.”

After Rock’s death, DJ Akademiks posted footage from an unreleased interview he did with the rapper a week-and-a-half ago. The video showed Rock revealing a time during the pandemic that he felt he had been targeted in a near-robbery attempt.
Watch the video below.

Rest in power PNb Rock our condolences to your family and loved ones.

The post Kodak Black, Nicki Minaj And Cardi B Trend After Speaking On PNB Rock’s Passing appeared first on The Source.