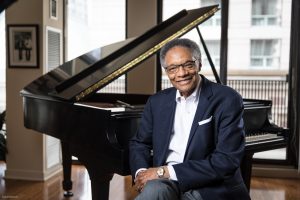 Chicago and jazz legend Ramsey Lewis has died at the age of 87. Lewis was at home in Chicago when he passed away on Monday morning, according to his Facebook page. A cause of death as not provided.

“Ramsey’s passion for music was truly fueled by the love and dedication of his fans across the globe,” his wife Janet Lewis said in a statement. “He loved touring and meeting music lovers from so many cultures and walks of life. It was our family’s great pleasure to share Ramsey in this special way with all those who admired his God-given talents. We are forever grateful for your support.”

In his career, Lewis won three Grammys and crossed over to the pop charts behind the success of his hit song “The In Crowd.”

Lewis was born in Chicago on May 27, 1935, and grew up in the Cabrini Green housing projects. He began piano lessons at age four and played at church, where his father was the choir director.

Lewis joined the band of a fellow student at Wells High School, Wallace Burton. The band was called The Clefs, and they performed a blend of jazz, and R&B. Lewis would transition into the Ramsey Lewis trio after the draft for the Korean War claimed multiple members of The Clefs. The trio would release their first album, Ramsey Lewis and His Gentlemen of Jazz, on the Chess Record Label. “The In Crowd” would break in 1965, and in 1974 he would collaborate with Maurice White and members of Earth, Wind & Fire for his Sun Goddess album. “The In Crowd” was placed in the Grammy Hall of Fame.

Ramsey Lewis was survived by his wife Janet Lewis, five children, and a host of grandchildren and additional relatives. You can read more about the historical life of Ramsey Lewis here.