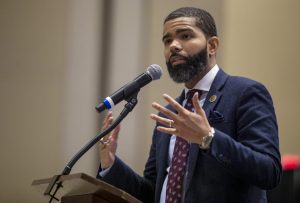 The Mayor of Jackson, Mississippi updated residents on the water crisis and revealed the city will soon have safe drinking water, but the problem is far from solved.

However, he explained that any repairs made now will not solve 30 years of deferred maintenance, and help would be needed on the state and federal level to help address the issue.

Last week repairs to high service pumps at the O.B. Curtis Water Treatment Plant was announced as completed.  However, the water quality in the distribution system was still under work, including investigating samples of water.

READ MORE: Kodak Black Gives Back To Haiti Donates $50,000 Worth Of Alkaline Water

Operators said they will need two rounds of clear samples to be able to lift the boil water notice.

A federal probe has been launched as Jackson residents have been without safe drinking water for over a month.  The mayor said he doesn’t know any details of the investigation, but welcomes any light it can shed on the cause of the failure.

The post Jackson Mississippi Mayor Gives an Update on The Water Crisis appeared first on The Source.